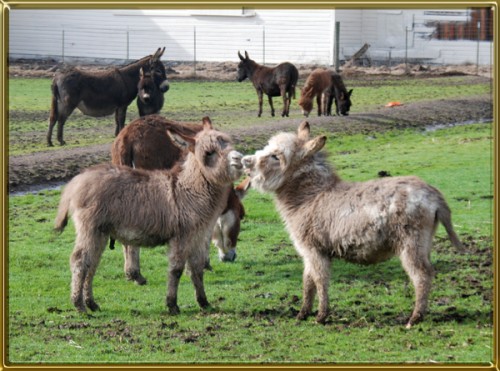 ITEMS YOU WILL NEED PRIOR TO YOUR NEW DONKEY’S ARRIVAL

bucket sized feeder that can be permanently fixed on a wall somewhere the donkeys can always get to it, and not play with it and knock it over (for selenium)

4 bales alfalfa and four bales grain hay or grass hay – This much hay should be enough to feed your donkeys over a month easily, depending on the weight of the bales and quality of the hay.

loose mineral selenium supplement – Horseguard and Select II are two that will work but there are others that will be fine as well.

bedding for their stall or barn – I strongly prefer shavings

somewhere safe to tie them

In watering donkeys I prefer to use a large sized bucket for two donkeys, but a 2’x3′ trough will work well too. Donkeys appreciate clean water. It is more work to dump a large trough than it is to fill a bucket. Since they drink most of a bucket full every day this water stays mostly clean. In fields where I have several donkeys I use low troughs with float vales on them. I dump the troughs weekly. This works well too as long as the troughs get cleaned from time to time, and that you don’t trust the float valves too much. The trough should be placed somewhere you will see it easily a couple of times a day. The valves can become plugged and not run at all, or flow constantly and make a great mess! I find they have about a two year life span, at least with our circumstance.

Miniature Donkeys get 90% of their bone growth in their first year of life. They need to be fed very differently during this time than they will as adults. I feed my young donkeys all the alfalfa they want to eat until they are a year old, in addition to providing them with the type of hay I intend to feed them as adults. I advocate feeding only limited amounts of grain. The best way to provide extra nutrition to donkeys, all their lives, is by adding alfalfa to their diet as needed. Grain ferments, so it has some risk in feeding it, and it is easy to overfeed it, which is also dangerous.

Donkeys are wasteful creatures. Given a choice they will pick out the best parts of the hay and walk on the rest, all the while telling you they haven’t really been fed. They lie! One of the best ways to deal with this is to use a sheep bunk feeder. They have a v-shaped assembly on the top to hold hay and a trough below to catch the finer parts of the hay. I often line the upper V part with hog panels cut to fit. Donkeys are happy when they are chewing, and because they are efficient in terms of using nutrition, they don’t require as much feed to stay fit as they would prefer to eat. Lining a feeder like this necessitates them to eat all day long. Rather than grabbing chunks of hay they must pull it thorough the hog panels a stem at a time. It keeps them busy and happy, and really cuts down on the amount of wasted hay. With donkeys under a year old just put both kinds of hay in the feeder. They will eat more of the alfalfa than they do the other hay and that’s fine. When they get to the point where the alfalfa in the feeder is mostly stems take that out and feed it to a less discerning animal. As adults I would expect my donkeys to eat that too, but with foals you want to keep the leafy, finer stemmed hay in front of them because most of the nutrition is in this part of the hay. The grass or grain hay in the feeder may stay there mostly untouched for weeks. That’s OK. They will get used to having it in their systems and will increasingly eat it too as they mature. If you feed grain hay you don’t need to give them any additional grain. If you feed grass hay 1/2 to 3/4 cups of grain per donkey per day might be a good idea – only until they are a year old. I’m tempted to type this sentence twice. There are few situations where it is necessary or desirable to feed adult donkeys grain. I feed 1/2 a cup or so as a treat after training (no treats during training), sometimes feed grain to a sick donkey that doesn’t want to eat much else, or to a new mom for the first few days after she has foaled. In this last situation if I need the jennet to have more nutrition I give her lots of alfalfa, not more or continuing grain. When your donkeys are a year old just stop feeding the alfalfa and leave them only the grass or grain hay.

Selenium is a mineral that donkeys use for bone and muscle development, so it very important to young or pregnant donkeys. Mini donkeys need an amount very disproportionate to their size in comparison to a horse. For instance, there is a 2 ounce scoop in the Horseguard or Select II container. That amount is right for a 1000 lb horse – or one mini donkey. Either of these products is added to grain. There are other loose mineral mixes in some locals that work well. In my area that product is called “Rogue 12-12” and is made by, and can be purchased from, the Grange. The amount of this product consumed at any given time is naturally limited by the percentage of salt in it. Donkeys will ingest only so much salt. I love this product. Have a special feeder, or arrangement, and feed only 12-12 from it. For instance, you might mount a small feed bucket type feeder to a wall in the barn. Just leave this loose mix in it at all times. The donkeys will eat what they need – sometimes more and sometimes less, but they will not eat too much of it. This is a very simple way to handle this issue.

A selenium salt block is a good thing to have in front of your donkeys just to cover all the bases, but do not count on them to provide the level of selenium your donkeys need!!!!!!!! Your donkeys absolutely will not stand there and work at ingesting as much selenium as they need, in part because the salt concentration in the block is too high.

Donkeys enjoy being brushed, and picking up and cleaning out their hooves is a good management practice. For one thing, your farrier will appreciate being able to work with well trained, respectful donkeys. I’ll talk more about how to do this when I get to talking about tying your donkey. Your donkey does not need to be washed, ever, or clipped, ever. It won’t hurt them to do either thing as long as the weather is right, but donkeys are so well designed it isn’t necessary. Their coat does what it needs to for them at all times. If you wash donkeys they will tolerate it, and probably enjoy the attention mostly, once they understand that it won’t hurt them. As soon as you untie them they will run out, hit the dirt, and roll like crazy. They’ll have a great time putting things back to normal! That’s no problem, but it may be a little frustrating for you. If you don’t want them to do this leave them tied until they are completely dry. Sometimes that can be hours. On this note, if you’d like to be oh so popular with your donkeys give them a big pile of sand somewhere out it the pasture, strategically placed so that you can watch. They will love rolling in it and may do so several times a day.

A 12 x 12 barn open on one side, or one with an open door, is perfect for two donkeys. A 10 x 10 space will work if it needs to. Create a level floor using decomposed granite or road base. Then cover it with 3/4″ Red Barn stall mats. Red Barn makes the best ones. They are a company out of Canada. Their mats are not petroleum based and are not slippery when wet. Donkeys love to drag around stall mats. It’s great fun. If you use the 1/2″ ones, as you might think you could get away with given that these are small animals, they will have a fine time with them!. I’ve tried it. When you install the mats don’t have four corners meet. Offset them, even if you have to cut up mats to do it. Corners are problem areas. If you end up with odd sized mats put the smaller pieces in the center, not on the edges. It is harder for the donkeys to drag them around when they are standing on them, and donkeys mostly stand in the middle. Avoid anything less than about 2′ wide.

Straw is not great bedding for donkeys. They eat it, it isn’t absorbent, and it is slippery.

A bored donkey is a destructive creature. They will chew on any exposed edge, or even flat surfaces sometimes, especially unpainted wood. To deal with that sort of thing here I line all exposed wood with hardware cloth (1/2″ x 1″ wire). Smaller wire is softer, larger openings are easier to grab, so I prefer what I use. Four feet high will do it. I staple it to the wood. If you put the upright wires facing out they don’t seem to be able to get purchase on it with their hooves or mouth. My jack barn has the same wire and boards, un-chewed on, that I started with ten years ago. It will really protect your investment. You can see pictures of what I am describing on my web site. Go to Articles, and then to My Custom Jack Barn.

Create a safe place to tie your donkeys. That can be a wood post along a sturdy fence line, a ring placed on a wood wall at nose hight. If you are tying two donkeys the spacing should be such that they cannot touch each other. That way they can’t get tangled up or fuss with each other. See the page on tying for more specifics.

This is a lot to assimilate. It is all my opinions only so please feel free to disregard….. I am always happy to answer questions. E-mail is the best way to find me (Cindy@BensonRanch.com). I want your relationship with your Benson Ranch donkeys to be all you dreamed of!