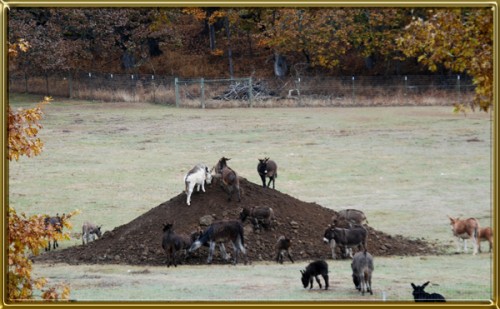 Miniature Donkeys are gregarious, inquisitive, busy little equines and are generally looking for something to do. This might be chewing on your trees or barn, braying, pacing the fence line, and other not so wonderful pursuits. Or, you can channel that energy into something you would rather they do.

Here at the ranch we like to give our donkeys toys, partly for their enjoyment but also for ours. Watching the donkeys play is more fun than watching television! Play behavior is also a great stress reliever and that is especially important this time of year. Donkeys don’t like to be wet so when it is rainy they will often spend hours just standing in their barn waiting for the weather to improve. In horses this kind of stress can be a cause for colic, ulcers, cribbing, etc. Donkeys generally handle the winter months better than horses but it can still take it’s toll, especially with the young donkeys and foals. We have come up with a few entertaining things for them to do.

Dirt piles are a great distraction. We have three large fields for the majority of our donkeys to live. In all three of them we have built their very own mountain. They are not small! The hills are ten to twenty feet high each and all the donkeys play on them; young and old, pregnant or not. Even foals that are just a few days old play on the hills. The closest hill is strategically placed so that I can watch the donkeys play from my office window. They run up and down the hill, around and around the sides, and get up on the top and play king of the hill. They will rear and box at each other and every once in awhile one of them will lose their footing and roll or scramble down the hill. It never seems to bother them! They get up and act embarrassed and pretend they meant to do it, and off they go again. I have never had any of them get hurt. I would not trust a horse to take such good care of it’s self but the donkeys are smart and resilient.

Donkeys also LOVE to be scratched and will rub on anything in sight to accomplish this on their own. We have a chest high electric fence around all of our donkey fields, in part for this reason, because when they scratch on a wire fence it can quickly stretch out of shape and look awful. So, in each of our fields we have given the donkeys a huge, gnarly tree stump to use and abuse. Every edge of those stumps are polished because of the donkeys scratching on them. They also climb on them and chase each other around and around them. Everything can be a game it seems.

There are other toys we have used to great success that we can give the jacks in their single donkey runs or use in other small areas. One of my favorites is a drain pipe ring. I use a four to six foot piece of corrugated plastic drain pipe, slit one end about eight inches or so, and stuff it in the other end of the pipe to create a ring. The donkeys love them and they last forever. My jacks will push them along the ground with their noses, which makes a great sound and the rings jump around, they will kneel on them and attack, and they will throw them and give chase. A few of the jacks throw the rings into their neighbor’s pen and one of my most beloved jacks throws his out of the pen and into the driveway almost every day. He has effectively taught me to fetch as I cannot resist throwing it back to him. Many people give their horses “horse balls” to play with. I have purchased several with high hopes but my donkeys all ignored them, until I flattened them. Now they chew on them and throw them like they do the drain pipe rings.

Another, possibly less appealing to the owner toy, is a cardboard box – be sure to use ones without staples. They will pounce and shred and destroy it as the pieces get smaller and smaller. How long I leave it with them depends on how much work I want to put into the clean up! Donkeys love their own sandbox, sans the box. They will paw in it, push the sand around with their noses, and pitch themselves over in it after a good game of chase. They will do much the same thing with a pile of shavings but the sand pile lasts longer. My donkeys will also play with a length of hose with the ends cut off, feed pans shared between them are they race around the pasture, and will joyfully thrash a tarp. It is important to remove the tarp promptly if it begins to fray though because the individual strands that make up the tarp can pose a serious colic risk. The other thing they love are hula hoops, especially the ones that make noise. I have a friend who keeps several hoops in her fields and she will often look out her window to see donkeys wandering around wearing hula hoops around their bellies. One of the great things about hula hoops is that break easily if need be.

I like to show many of my donkeys in trail classes and these toys can really serve to desensitize and broaden their horizons. All this training happens on their own time while I do other chores. So, let creativity rule. My good friend, the same one with the hula hoops, says the Dollar stores are full of donkey toys! I hope you will go out and have some fun with your long eared friends! 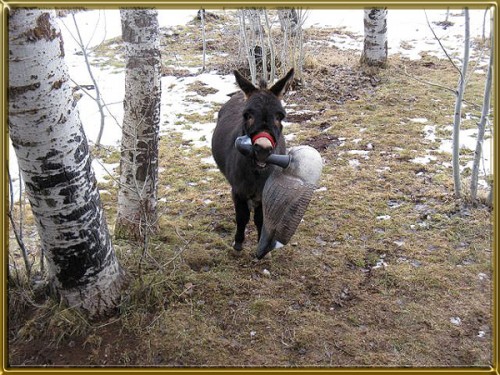