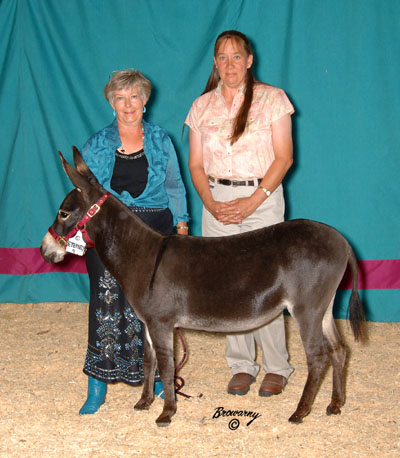 Sharon Cooke and I with Circle C Eternity

In the fall of 2006 I purchased the Circle C herd of miniature donkeys from Grant and Sharon Cooke of Cooke Livestock, Alberta, Canada. I wrote an article called “You Bought How Many Donkeys???” about the story behind this opportunity which was published in the Asset, issue #66, Summer 2007. It can also be found by going to my web site, www.BensonRanch.com, and looking at the “Articles” page. In it I promised a follow-up, and here it is.

It took seven trips to Canada and $10,000 to bring all the donkeys home. I began transporting them in September 2006 and brought the last group home in April of 2007. I took a break in the middle to let the winter settle down – I have a low slither and slide threshold. I moved them all myself, (with the exception of letting my husband bring one load as I led the way), because I couldn’t trust this precious cargo to a hauler. The other advantage to doing it this way was that it allowed us time to build new barns and fences, and I was able to get to know the donkeys gradually. They tended to look long at me. I was NOT Sharon, and where were they anyway! Earning a relationship with them took time and I really enjoyed the process. There are still a couple of hold-outs one year later but I have lots of patience for this sort of thing. My wonderful husband has put up almost a mile of new fencing for me and two more barns. I look forward to the time when we will have the facility aspect where we want it. He isn’t going to know what to do with all his free time.

Bringing the last group home was difficult. The geldings were moved in the first load, followed by the most pregnant jennets, then open and young stock, and so on. The last to head to Oregon were Sharon’s dearest favorites, including MGF Future Link and Coco Channel of Circle C. I was inside the trailer positioning donkeys as the lead ropes were handed to me. At one point I looked up and into Sharon’s eyes as she handed me Coco Channel. I will never forget this moment. I would walk through fire before I’d hurt Sharon but here I was, doing just that. For those of you who don’t know, Coco Channel is Sharon’s beloved favorite and she has been known to tell those who tried to buy her over the years that Grant, her husband, would leave before Coco did. That flashed across my mind as I took the lead rope. I know that Sharon and I planned our futures with her herd very carefully and we both knew this time would come but it was much, much more painful than I had expected. Future Link was the last to load and Sharon and I were careful not to let our eyes meet as Grant took him from her and put him in the trailer. The truck was running and everything was ready for this moment. I left quickly. For the first hour of the trip home I fought my tears and the urge to turn around and give these donkeys back, particularly Coco, but Sharon and I had made an educated business plan and it was time to stand up straight and look it in the eye. There would be many more joys as well as sorrows in the years to come with this herd and I needed to be strong enough to meet both.

All the donkeys tolerated the demands of travel with ease. They ate and drank as I drove along. I always took a look at them whenever I stopped, and often I would find several lying down and gazing tranquilly at me. They handled their new Oregon surroundings with ease as well, with the exception of Legend. For three days he was inconsolable. I put him in a nice field with jennets on all sides of him, and spent lots of time with him, but I couldn’t make it easier for him. I am very grateful the other jacks didn’t go through that.

Foaling season began in April. We had 20 foals this year, and fourteen of them were jennets. It’s a wonderful way to get started! Sometimes we had two foals born in a day, and one day we had two foals and a miniature calf born. The ranch was a happening place. In the midst of this I hired the extraordinary Miss Airica Cornwall. She is an eighteen year old super human who has tremendous work integrity and significant equine skills. Having her help has made all the difference. Airica is a part-time student, (an A student I might add), who is pursuing a Veterinary Technician Certificate. She earns school credits for working here and can fulfill many of her certificate requirements by learning what she does here at the ranch. She also is able to put up with working with me which can be challenging. I am very fussy about how the donkeys are handled, especially the jacks, and Airica has earned my respect. The donkeys love her. We do all breeding by hand cover and those of you who do this as well know how long it can take for a jack to get serious about the task at hand. There were times that Airica and I bred six jennets to six different jacks in one day. That is a significant time commitment and it can make getting anything else done a challenge. We did 140 live covers from April through November, and have settled better than 80% of the breeding age jennets. That simply would not have been possible without help. I have never been willing to trust an employee with my animals but having this many didn’t give me a choice. Airica has become much more than a hired hand to me and I hope she stays FOREVER!

Our show season was interesting. I have been showing donkeys for fourteen years and have taken it seriously and learned a lot, but I sure can’t show like Sharon and Krista Cooke. I took lessons over the winter and that really helped but those of you who show know that poor handling can make a good donkey look bad. I didn’t want to be the reason my donkey didn’t place well. Airica showed with me and as it turns out I have much to learn from her as well. We showed ten donkeys through 2007 and the NMDA National show was our first of the season. What a place to start. Most of the donkeys had never been shown, and were new to us, so we really earned our successes. They did very well but I look forward to the 2008 season. We will be ready!

The day before the National show we held an Open House here at the ranch. The show grounds are only about twenty minutes from the ranch and I wanted to take advantage of having so many out of the area donkey folks close by. Many of them knew about the Cooke herd but because it was so far away in Canada they hadn’t met them and I wanted to change that. We worked hard for several months to be ready for the Open House. We had flowers everywhere, the event was catered, and we even had shuttle service by way of a padded 4-wheeler trailer from the parking area to the granary and pastures. I had made name collars for fifty of the donkeys and distributed lists with their names, sire and dam, and special items of interest, as well as some history of the ranch, so attendees could roam the pastures and snuggle donkeys while knowing who they were looking at! We even had root beer floats for dessert. There were over 100 people here and I think they had a good time. I’d like to make this an annual event so please join us for fun and great food in early August 2008.

I guess to sum it all up I would have to say that living with the responsibility of all these donkeys feels normal to me now. Sharon has been so good to work with. She has been very involved with breeding decisions and has taught me much. There is certainly more strategy required to keep up with the herd in a thorough and professional manner than it used to take me when I had twenty to forty. I leave nothing to my memory. It all goes in my donkey record book and in the computer. I print out “to do” lists at the beginning of each month for veterinary and farrier needs. All breeding information goes in my breeding binder, where I have a page for each of the jennets. I have enjoyed sharing the herd with new donkey enthusiasts and established breeders alike. The business side of things has sometimes been challenging but learning new skills is rewarding and I’m finding I have an aptitude for a lot of it. Sometimes I still worry about the enormity of what I have undertaken, and when that happens I just put one foot in front of the other and do my very best every day, a piece at a time. After the first article was published I had so many donkey breeders contact me to wish me well and to say they believed in me. That felt so good. Thank you! From mid-December through March I get to take a little break from the pressures of foaling, breeding, and showing. Then it begins again! I’ve tremendously enjoyed 2007 and am looking forward to the future. If you’re ever in the area please stop by!