Circle C Legend had a spectacular career as a herd sire, and at the tender age of eighteen years old he became a gelding. So began a new chapter in his life. After many years of service to Sharon Cooke in Canada, and then to me here at Benson Ranch he now has friends to romp with, a big field to play in, and not a care in the world. Castrating young donkeys is common; castrating an older animal concerns some people so I thought I’d share Legend’s success story.

Legend isn’t particularly old for a jack. I have three jacks this age and the other two – MGF Future Link and MGF Red Jet – are still reliable breeders. Legend was an inconsistent breeder for several years, in spite of my best efforts. Injectable testosterone gave me a couple more foals from him but there came a point when I just wasn’t willing to give him more drugs to try to get him to do what he didn’t want to do. So I made my peace with thinking of him as retired and let him be. He lived in a reasonably sized paddock with donkeys all around him for a year or so more, and was happy I think, but he paced the fence and yelled at jennets as jacks will do and I wondered if I could do more for him. So I made the difficult decision to geld him. I hoped that if I did this he would be able to live in a group with geldings as companions and lots of room to run and play.

Jack behavior is both learned and hormonally driven, so gelding an aged jack isn’t a sure thing in terms of changing how he sees himself. Once castrated it takes about thirty days for testosterone to leave the jack’s system, but the jack still remembers being a breeding animal. There is a risk with an aged jack that he will go through the physical stress of being castrated and still think of himself as a breeding jack. We have gelded many jacks at ten plus years of age and all of them became sweet, laid back geldings but there is still that possibility. I love my donkeys, and Legend is especially dear to me. I wanted to do all I could to give him the best quality of life for his remaining years. I’ll admit that I turned away with tears in my eyes as Mitch gelded him. Legend has been larger than life to me for so many years it almost seemed like sacrilege to do this to him.

Caring for an aged jack post-surgically is different than it is for a young animal. I used Banamine for pain management for about a week and hydrotherapy several times a day until swelling was not an issue. I hovered over Legend to be sure he was eating well and hoped I wasn’t putting him through this for nothing. He handled everything surprisingly well and enjoyed all the extra attention.

I waited about six weeks and then moved him to a field sharing a fence line with my group of pet geldings. He wandered off without even giving them a look. The old Legend would have raced around and screamed at them. I let him live near them for a couple of weeks and then got brave and turned him in with them. I did leave his halter on at first in case I had to grab him and rescue my boys. I needn’t have worried. He walked off into the sunset with them like he’d known them all his life. It really made me smile, especially since included in this group is a coming two year old jack. The youngster postured at Legend and Legend ignored him. When I go out to feed and this group meets me at the gate it really makes me smile to see Legend come up so relaxed and happy! 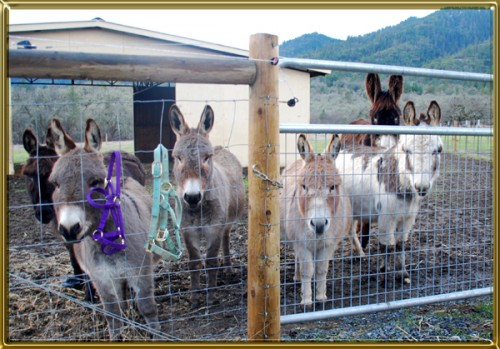