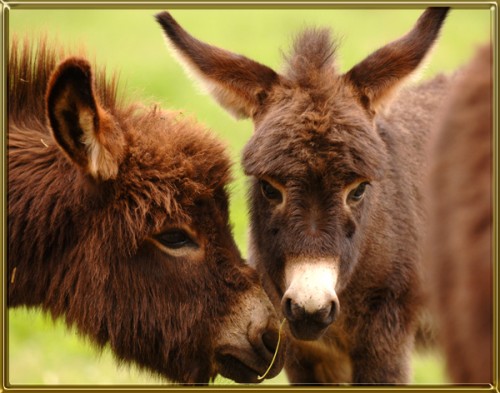 All equines need selenium. It is naturally occurring in most soil types, except volcanic soil such as the majority of soil in the Pacific Northwest, and is therefore found in food sources such hay and grain. In areas such as these the need to supplement selenium isn’t given much thought and the horses, mules, and standard donkeys do just fine. This is not necessarily true of Miniature Donkeys and a lack of the necessary levels of selenium can have catastrophic impact on them. I have experienced this in my own herd and would like to share what I have learned with you. In some parts of the country the selenium levels in the soil are actually too high and care must be taken in providing feed in these areas. Selenium is taken up in plant growth so where you actually live is not as important as where the hay you are feeding was grown.

In 2001 I lost seven of eight foals that were due in that year. One jennet aborted at five months and the rest aborted in the last month or two of the jennet’s gestation. A fetus of this age is developed enough that it looks like it should just open it’s eyes and stand. Finding deceased foals like this in the field was emotionally devastating for me. My equine veterinarian husband and I scrambled to try to figure out what went wrong. Among other things we sent blood samples from the jennets who had lost the foals, and in some cases the fetus it’s self, to the state veterinary lab. They were able to give us a definitive answer and the culprit was deficient levels of selenium. It broke my heart to know that this was something I could have controlled but just didn’t know it was a problem and neither did Mitch. In his equine veterinary practice of 20 years where we lived he had never seen an abortion caused by selenium deficiency in the horse population. Once we knew why we had lost our foals we set about a greater understanding the problem.

A simple blood test will show what your equine’s selenium blood levels are but the problem for Miniature Donkey owners is that no one knows what the levels should be for Miniature Donkeys. There is clear clinical evidence that they need substantially higher levels than horses do so giving them more access to selenium sounds reasonable but caution must be used because selenium in high levels can be toxic. In our herd and situation we set up four test groups. Selecting at random we used blood testing to determine the blood levels that the herd had to begin with. Then in one group we fed hay grown in a selenium rich area only. In  one we offered free choice access to a mineral supplement with selenium in it, in one we used injectable selenium, and in the final group we used injectable selenium and free choice to the mineral supplement. These three groups were also being fed the hay with selenium in it. We did this for three months and then tested again. The highest selenium blood value we found was a high normal for horses, and in our final group we had used selenium in levels high enough to be toxic for horses! Using what we learned in our research we corrected the herd’s selenium intake with both injectable selenium and free choice minerals with selenium. Now, eleven years later, I can say that we have had extremely good results with this program so I feel it was the right choice for us in our area.

Selenium is critical for muscle development. In the case of a pregnant jennet her fetus gets all the selenium it needs from what is in her system as it develops and if that is depleted the jennet will often abort, especially in the last 3-4 months of gestation when the growth rate of the fetus is most demanding.  If she is able to hold onto the pregnancy the resulting foal may be born with heart and/or lung problems and may not thrive in general. We have seen foals with windswept legs, down on their pasterns, with respiratory challenges, and foals that can live a week or two but then are lost because their disadvantaged system cannot keep up with the increasing demands of growth.

Low selenium levels can impact fertility as well so if I have trouble getting a jennet to settle I use a boost of injectable selenium and often the jennet will settle in the next cycle or two. There is no way for me to really know if using the increased selenium is why she settled but I have seen consistent clinical evidence to suggest this helps and it is a fairly innocuous thing for me to try. We also routinely give a small amount of injectable selenium to every foal within the first day or two after birth and believe it gives them a boost to thrive.

There are many options in supplementing selenium in your equine’s diet. Many vitamin and mineral supplements will help but you must use substantially higher doses of them to get the result you need for Miniature Donkeys. For instance, I have used Horse Guard and Select II added to a little grain for this purpose. Both advise two ounces as the correct dosage for a horse of typical size – I use this amount per adult Miniature Donkey. This is appropriate for my Miniature Donkeys because my hay is grown in a very selenium deficient area. The problem with using vitamin and mineral supplements for Miniature Donkeys is that the vitamin portion is higher than what they need. I have not seen clinical evidence that this is harmful but it is at least a waste of money. There is a product called Vitamin D and Selenium specifically. This product can be dosed to individual equines but should not be fed free choice because that can cause toxic levels of selenium. In my situation my donkeys live in groups so I prefer to use a free choice supplement. A supplement like this has added salt which limits the amount a donkey will stand there and ingest at any given time. This has worked well for me. In some parts of the country you can purchase selenium salt blocks. These do not provide enough selenium for Miniature Donkeys in most cases.

It is always wise to check with your veterinarian.  He/she can advise you of what typical selenium levels are in your area and can use a blood test to help you determine if you need to make a selenium change at all.